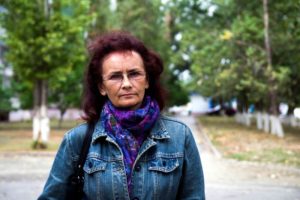 On September 3, the day of solidarity against terrorism, the victims and consequences of terrorist attacks are remembered in Beslan, Budennovsk, Buinaksk, Moscow, St. Petersburg, Volgograd and, of course, Volgodonsk. Moreover, on September 16, our city will celebrate its own mournful date-21 years ago, an explosion occurred in a multi-storey building in the early morning, which divided the lives of many citizens into “before” and ” after».

Irina halay, Chairman of the Volga-don NGO, which unites victims of the terrorist attack, was in Beslan on this day last year. The monstrous tragedy when the militants seized the school has become a tragic symbol of today’s date. Together with the organization” Mothers of Beslan”, social activists from other cities where the attacks occurred, again discussed the main problems. The main one is that the law on the status of victims of terrorist attacks has not yet been adopted, which means that there is practically no guaranteed social support, treatment, and rehabilitation.

– We continue our struggle, – says Irina Ivanovna. – Years have passed, but everything is fresh in my memory, as if it was yesterday. Victims of terrorist attacks who became disabled are still forced to go to the authorities with an outstretched hand. We do not want any additional payments, but we ask one thing: let the state at least help with the treatment of the consequences of terrorist attacks. After all, ordinary people are not to blame for being in the wrong place at the wrong time. But, unfortunately, today we see that everything is forgotten. In recent years, our organization has been denied grants at all levels, although we ask for support specifically for older people who went through hell in 1999. So let’s not just light symbolic candles today, but remember those who lost loved ones, acquaintances, and friends when they seized a school in Beslan and blew up houses in Moscow and Volgodonsk. And think about what it’s like to lose everything and then be useless to anyone.