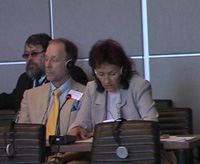 I thank all who helped me come here and gave me the opportunity to speak today.

Terrorism and violence have no citizenship or nationality; it is a world problem, as are the problems of terror victims.  Only together can me overcome the consequences of terror acts in this world.

Eight years have passed since the terror act in Volgodonsk.  More than 15,000 people suffered as a result of the explosion of two tons of TNT and hexogen.  This is every tenth resident of the city.  Nineteen people died and 73 became handicapped for life, and 42 buildings including two schools were damaged.  The huge blast wave caused the residents of three city regions to receive contusions, barotraumas, as well as multiple traumas, cuts, abrasions, severe psychological traumas and stress.  All this had an effect on the mental and physical health of the victims, and is evident in their headaches, cardiovascular problems, memory deficits, vision and hearing loss, irritability, aggressiveness, post-traumatic syndrome, and panic attacks.  Those within the radius of the blast lost homes, possessions, and livelihoods with regards to their loss of ability to work.

A one-time payment of compensation was made to the families of those who died, in the amount of 470 Euros.  Those permanently handicapped by the disaster received from 110 to 230 Euros, while the injured received 35 Euros.

In 1998 more than 100 construction workers from Volgodonsk were taken hostage.  They are also victims of terror, but they have been all but forgotten.

For 8 years we have been fighting to ensure that the leadership of our nation adopts a law on social protection for the victims of terror acts.  This question, however, has still not been addressed.

All the victims of the 1999 terror acts, both adults and children, all hostages, and children born after the terror acts to mothers who received injuries and underwent severe stress, are also in need of assistance: psychological, medical, professional, and legal.

Every court in Russia refuses to examine our lawsuits for compensation for health damages because of the absence of an applicable law.  Our petitions to create such a law, sent to the national parliament, the president of the Russian Federation, and the chairman of the Russian government, have likewise been refused.  Neither the

, nor the Russian plenipotentiary for human rights, wish to solve our problem.  There theme is always one and the same: there is no applicable law.

Children are our future, and  we can only ensure through our efforts  that they grow up sound individuals.  Children and adults are sick, but they remain alone with their problems.

Understanding that only together can we solve anything, in 2006 we who were handicapped during the terror act in Volgodonsk united together and created the ‘Volga-Don’ organization, which has forced the officials to remember that there are victims of terror acts in Volgodonsk who need help.  This organization, despite its lack of financial support from the government and big business, is trying to assist its members in legal and social services problems.

Our repeated appeals to the leadership of our country, and to all branches of the government, on adopting a law on social protection for victims of terror acts has still not led to anything.  In the Russian federal law, titled “Countering Terrorism”, as well as a resolution of the Russian federal government, titled “Confirming the Rules for Providing Social Rehabilitation to Persons Suffering as the Result of a Terror Act”, the status of “Victim of a Terror Act” and “Handicapped due to a Terror Act” are still absent, as well as any mechanism for fully compensating loses to health.

Proceeding from the principles of justice and equality for all in the eyes of the law, as well as the equal value of life and health of citizens, the status of “Victim of a Terror Act” and “Handicapped as a Result of a Terror Act” must be established, but not as it was determined after this terror act, i.e.: “an everyday home accident” with a pension of 40 to 50 Euros per month.

This status must be disseminated to those who after a terror act found illnesses in their children that are a result of the traumas and stresses that the mothers endured.  The level of compensation for harm (the monthly payment of insurance) to victims of terror acts should not be less that of other related legal standards.  These citizens require qualified exams and treatment for contusions, barotraumas, and psychological traumas they have received.

The complaints we sent to the European Court of Human Rights cannot solve every problem, i.e.: those that touch every individual victim, but they are necessary to solve the problems of thousands of people.

With regards to the gap in legislation in Russia, and the stubborn unwillingness of delegates in the national parliament to introduce into the federal law “Countering Terrorism” an understanding of the status of a “Victim of a Terror Act”, we have been deprived of our right to a worthy standard of living.  This is counter to the norms of international law in Article 25 of the UN’s Universal Declaration of Human Rights: “All have the right to a standard of living necessary to support health and well-being of themselves and their families and the right to support in the case of a loss of work or other cases of the loss of the means of existence independent of the circumstances.”

Harm caused by a terror act in reality is impossible to calculate, and impossible to remedy.  Compensation must provide victims of a terror act with a worthy standard of living.  Proceeding from our eight-year experience in working on the problems of victims, we propose the adoption of the international status of “Victim of a Terror Act” with all social guarantees:

— To provide a mechanism for directing confiscated resources used to finance terrorism to instead to be used to provide for the support of victims of terror acts.

— The government must admit its obligation to fully compensate material damages and mental suffering caused by a terror act, using the federal budget.

— In connection with the large number of victims of terror of the September 16th, 1999, terror act in the city of Volgodonsk (more than 15 thousand residents), a rehabilitation center for victims of the terror act with modern medical equipment must be established.

— To develop a mechanism of medical rehabilitation – a complex of examinations and treatments, sanitarium treatment for adults and children, and summer health camps for children and adolescents.

— To develop a professional rehabilitation program for those persons who became victims of terror acts, aimed at restoring their professional knowledge, skills, and wisdom that were interrupted as the result of a terror act.

— To establish as a cause of invalidism the status of “Handicapped as the Result of a Terror Act”, with all social guarantees.

— To solve the question of limiting compulsory military service for those young men who were victims of a terror act with regards to receiving psychological traumas.

— To provide middle and higher professional education to children who are victims of a terror act.

— At the international level, to solve the problem of financial support to public organizations that protect the rights of victims of terror acts, with regards to the absence at this time of any type of financial assistance from the government, as well as from big business.

Changing the situation today in Russia with regards to the absence of a law on social protection of the rights of victims of terror acts is essential, and can only be accomplished at the international level.