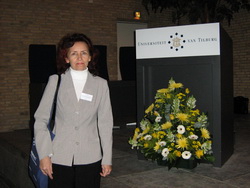 The International standards of the help o the victim of terrorism are quite important. It is very important to use the experience of different people, who became the victims of terrorism to overcome their problems.

I myself am a victim of terrorism in Volgodonsk in 1999.

Terrorism and violence don’t have citizenship and nationality, it is the world’s problem. We all together will be able to overcome the consequences of the terror acts.

8 years ago have passed after the terror act in Volgodonsk took place where 180 000 inhabitants lived and as a result of the explosion of two tons of trotyl and geksogen in September, 1999. More than 15000 people suffered. All inhabitants of 3 parts of the town where terror act happened got a air wave, contusion, barotraumas, psychological injure, the heaviest stress as well as a plenty of injuries, cuts, bruises and now it influences the psychological and physical health (headaches, heart diseases, memory worsening, the worsening of the eyesight, hearing, irritability, aggression, post trauma disorders), “the syndrome of panic attacks” as well they lost their dwellings, property, income in connection with the lose of the ability to work.

The people both grown-ups and children even those born after the terror act whose mothers got injury, suffered from the strongest stress need help too – psychological, medical, professional and legislative.

We think that it is necessary: