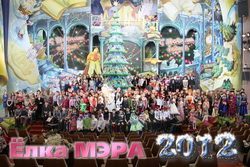 In January 2012, during the winter holidays 9 children of members of the regional public organization promoting the protection of the rights of victims of terrorist attacks “Volga-Don“, at the invitation of the Mayor of Moscow, visited the New Year holidays in the capital of our country. Christmas story for children Volgodonsk was held!

For 220 children from regions of the vast Russia had prepared a wonderful and very intense program.

The children took part in a variety of Christmas events.

Thanks to the Mayor of Moscow

But the main thing was – this is of course New Year’s performance in the Moscow Government, where all the guests on behalf of the Mayor of Moscow Sergei Sobyanin, welcomed the deputy head of the Department of Interregional Cooperation, National Politics and Relations with Religious Associations of the city of Moscow, Yuri F. Nuzhdin.

Fabulous action completely captured every child. All were looking forward to when the same Ded Moroz (russian Santa Claus) with his magic stick dispel evil spell and justice will prevail.

Gifts that were presented to the children at the end of the holiday, caused indescribable delight.
The children taken away as a souvenir a fabulous house, which in addition to sweets, were postcards with sights of Moscow and wonderful dragon-backpacks.

Tretyakov Gallery, Christmas Tree Show in Circus on Vernadsky in the Grand Kremlin Palace, the Cathedral of Christ the Savior, and more.

The children were delighted with the concert, prepared for them by Moscow peers.

On the last day, a visit was organized by the Museum of Cosmonautics. Despite the fatigue, all breathlessly listened to the guide and looked at the exhibits. Himself to visit a spaceship! Who has not dreamed of the boys about it? Thanks to the organizers of the New Year holidays, the boys were able to pull it off.

All the guys say thanks to the Mayor of the city of Moscow for the fact that children from the regions are in touch with the history of Russia, to visit the places where they themselves could never go.